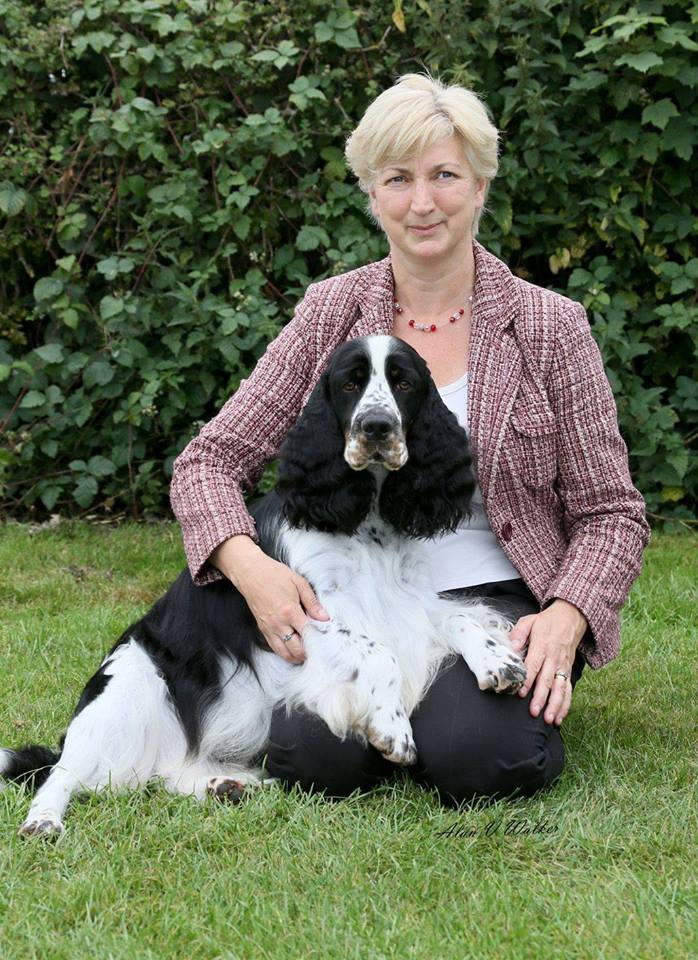 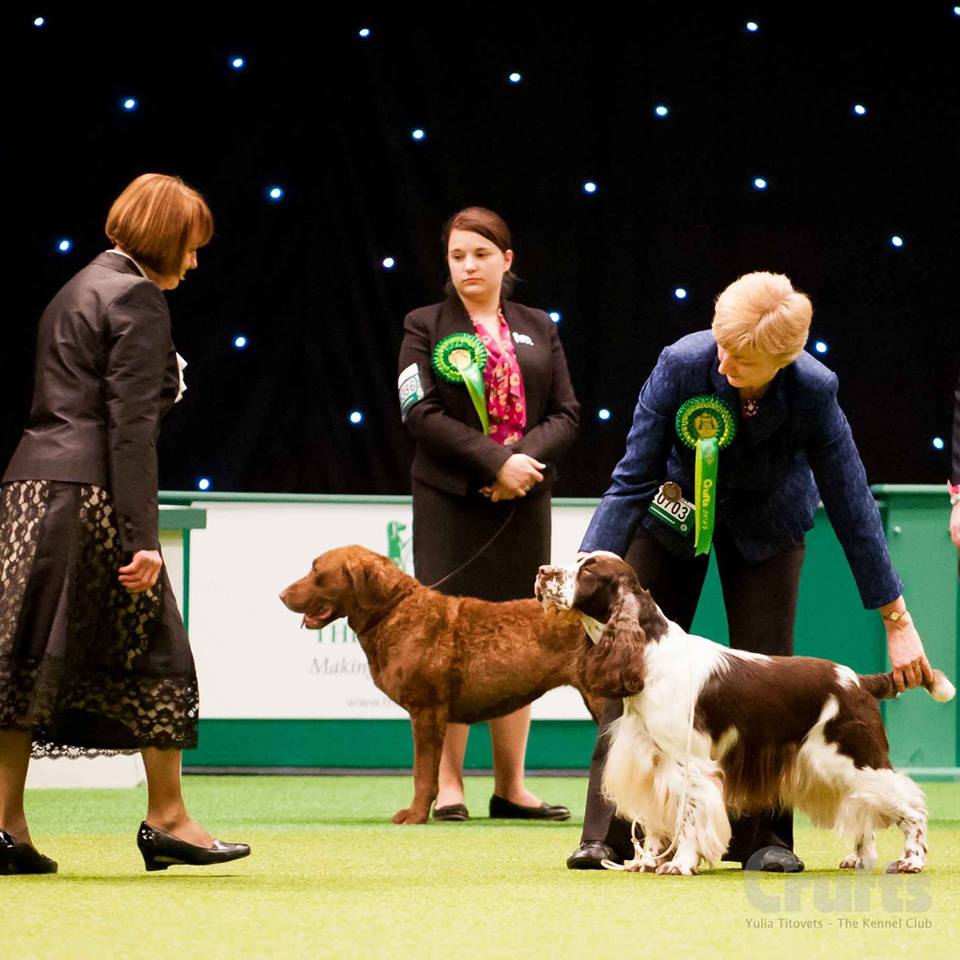 For over 20 years, with my husband Steve, we have had both the working and show gundogs. Our breeds have been Labradors, German Shorthaired Pointers and English Springer Spaniels.

We were granted the affix ‘Meadowdale’ by the Kennel Club in February 1995. To date, we have ‘made up’ a FULL champion German Shorthaired Pointer, along with other dogs that have gained field trial and show awards. Our Labradors are of the working type, who have competed in Field trials and working tests, but mainly worked on the local shoots.

My main breed for showing is the English Springer Spaniel. To date there have been 8 show champion dogs to carry the Meadowdale affix, and 4 Irish Show Champions, along with many other awards such as JW, ShCM, CC’s and RCC’s
I was delighted to have achieved ‘Top Breeder’ 2013 & 2014 and ‘Top Brood’ for 2013, 2014 & 2016 for the English Springer Spaniel. Previously also having been awarded several ‘Top Puppy’ awards.

A thrilling moment for me was in 2014, to have won ‘Best of Breed’ at Crufts, with Sh Ch Meadowdale Chaos JW ShCM
Then in 2015 to have ‘made up’ the first Black/White & Tan dog for 20 years in the breed (In the UK), Sh Ch Meadowdale Cassapple Manhattan JW.

I have been most fortunate to have been able to have judged our lovely breed in many countries, including: Holland, Denmark, Sweden and Australia. I am very much looking forward to seeing the fabulous dogs in Finland!

The history of the Glenbrows Kennel goes back many years; the origins stem from me showing Glen of Imaal Terriers and black and tan cockers with tan eyebrows – the Glen and the brows! Much success was enjoyed in both of the breeds, the pinnacle being Sh Ch Glenbrows Raincloud JW gaining his title and best of Breed Crufts 1999.

The welsh joined the kennel in 2001 following a visit to the great Cleavehill Kennel of the late Jean Taylor, before our children were born, theoretically for another ESS for Honor, however a 2 year old little red and white madam had other ideas! A very shy Cleavehill Ceri decided that I was to be hers, and so she joined us in Derbyshire.

In the early days of showing Ceri a chance conversation with John Thirwell led to a very hairy 12 week old puppy joining us, he was to become Honor’s dog. These first two welsh became Sh Ch Cleavehill Ceri for Glenbrows and Sh Ch Ferndel Storyteller for Glenbrows JW Sh CM respectively, but most of all they were the closest friends of our then two very young sons, and all the present day kennel descend from these two.

Many homebred Champions have now followed, however our dogs are very much a family affair, and champion or not, each of our dogs is part of the family. In the show ring we are very proud to claim a number of champions, several breed club championship show best in show winners; Crufts best of Breed winners; top dog; top bitch; top puppy and top breeders.
‘Glenbrows’ champions are found internationally in WSS, cockers, ESS, Sussex spaniels and a Curly coated retriever.

I thank the club for their kind invitation and I am very much looking forward to my visit.

I started showing dogs in the early 1960’s with GSD. I continued to show and breed GSDs until the early 1970s. It wasn’t until 1975 that I owned my first gundog – an English Setter. I showed both English Setters and Pointers with some success until I bought my first Welsh Springer Spaniel in 1988.

In partnership with my wife, we also owned and campaigned the first UK Champion Bichon Frise.

We now have (and had) a number of WSS living at home, including the Top WSS Dog 2008 and our foundation bitch who gained her title aged 21 months and finished 2011 as Joint Top CC winning WSS Bitch. WSS we have bred are now being successfully shown in the UK, America, Australia and Europe.

We are currently campaigning a number of WSS including an Am GCH just returned from the US.

I am passed to award CC’s in English Setters, WSS, IWS . Clumber Spaniels, Weimaraner, ESS, Irish Setters and American Cocker Spaniels plus the Gundog Group. I have judged in USSR, Sweden and the USA.

I am delighted to be asked to judge at your show.